The Ancient Roots of Anti-Judaism

Scholars trace anti-Jewish myths, hatred, and violence back to the time of the Roman Empire in this historical overview of anti-Judaism’s roots.
Last Updated: May 27, 2022 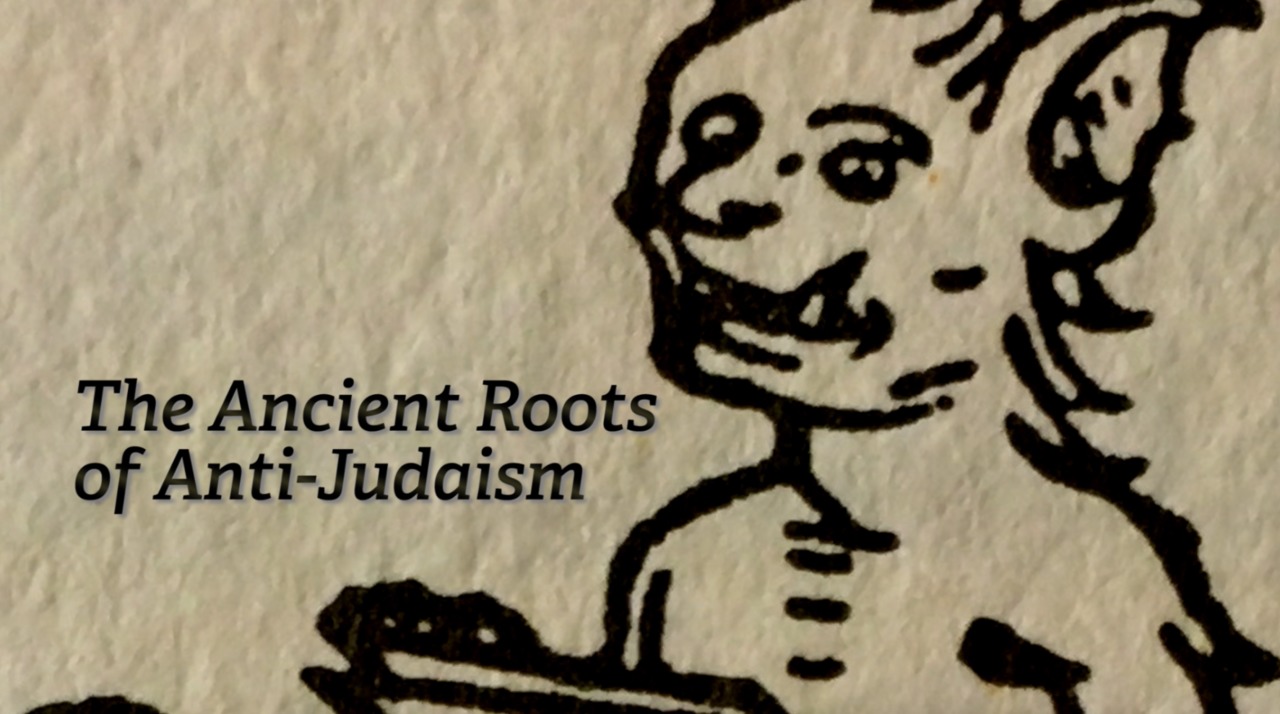 Stereotypes and myths are often at the heart of hatred. Stereotypes evolve over time and can be used to motivate and justify prejudice and discrimination. Antisemitism can be understood as a convenient hatred. Ideas about Jews have been impacted by the societies in which they live.

In the ancient world, it was not easy to tell who was a Jew and who was not Jewish. They did similar jobs and lived in houses that weren't all that different from their neighbors. One difference, however, was that in a time when most people prayed to many gods, Jews were monotheists, praying to only one god.

The Jews' religious differences were seen by some as a challenge. Could they be trusted? When Greek and Roman rulers conquered Israel, the center of Jewish religious life, Jews began to move and form communities across the ancient world. As they did, they had to adapt to life as newcomers.

And then, in a time when the Romans ruled Israel and brutally suppressed challenges to their power, a new religion emerged-- Christianity. Jesus was born and lived as a Jew, and the earliest Christians thought of themselves as Jews as well. But eventually, in order to win new followers and protect themselves from Roman persecution, Christians began to try to separate themselves from Judaism. This changing attitude toward Jews and Judaism is reflected in the gospels included in the New Testament, written one to two generations after Jesus' death.

With the emergence of Christianity and in the sacred texts of Christianity when they became canonized, what we end up finding in that literature are key images that end up having an enormous afterlife. One is Matthew 27:25, repeated differently in John, in which you have standing before Pontius Pilate a group of Jews who call for the death of Jesus, bay for the blood of Jesus, and then in Matthew 27:25 say, as a group, "His blood be upon us and upon our children." That line becomes fateful because it seems to implicate not only those Jews who were there at that time, but the inheritors of that entire tradition over time.

The charge that the Jews were responsible for killing Christ has been refuted by historians, because crucifixion was a Roman punishment, not a Jewish punishment. And Jews would almost certainly not have had the power to impose the death penalty in the way it was described in Christian texts. However, the myth that the Jews were Christ killers was impactful, because Christians believed if a people were capable of killing their god, they were capable of anything.

So there's the image of John 8:44, in which you have in the mouth of Jesus, speaking to a group of Pharisees and other Jews around him, Jesus saying, "You are of your father, the devil." That one-liner will later be picked up in terms of associating Jews with the devil. This is the single most important association in the history of Judeophobia. That set of images becomes very powerful, deeply toxic, a well water out of which Christian civilization comes to define itself and its values and its institutions in opposition to Judaism.

Within a span of a few hundred years, and with the support of Emperor Constantine and other Roman leaders, Christianity grew to become the dominant religion in the Roman Empire.

As Christianity becomes more powerful, its vilification is more powerful. And thus you have a pattern in Christianity, which is developed as early as the end of the fourth century by St. Augustine, of trying to explain how Christians should behave towards Jews.

On the other hand, they are not to be killed. They are to survive. And they are, for hundreds of years, the only religiously tolerated minority in Europe.

In the Middle Ages, the Crusades, a series of wars fought to regain holy territories and further Christian interests, disrupted this already vulnerable coexistence. In 1096, Pope Urban II's call for the First Crusade led to the first mass murder of thousands of Jewish people in parts of France and Germany, carried out by Christian peasants. This Judeophobic violence would become increasingly common as old myths about Jews continued to develop and spread.

In the medieval period, the key frame is to understand that between the 12th and 13th centuries, the association of Jews with the devil becomes deep and fixed within Christendom. It's recounted in sermons. It has been included into the liturgy. It has been included into the folk tales that parents tell their children. And it ends up resulting in new myths in the medieval period.

The first of these is the myth of ritual murder, or the myth of blood libel. That emerges in the 12th century in England, this idea that Jews are using the blood of Christians for ritual purposes or that Jews are so committed to the destruction of Christianity that they are reenacting the killing of Jesus in an ongoing way.

And then in the 14th century, in the context of the Black Death, in which you have anywhere from 1/3 to 1/2 of the population decimated by this plague that no one has any idea what the cause of it actually is, the idea that Jews are poisoning the wells and that this is the source of contagion that's leading to this mass death.

Many of these myths speak to core emotions that animate people experiencing fear and anxiety. They're a sort of one stop shop story to provide an account for what ails you when you don't have a language to be able to name what the cause of your problem is. What causes the Black Plague? No idea. One stop shop answer? Well, poisoning by evil people committed to the destruction of your way of life-- the Jews.

By the 16th century, Jews were now mostly confined to ghettos or Jewish quarters, areas of cities or villages in which they were forced to live in isolation. Although Jews were granted the right to live in certain towns in Western Europe in return for taxes and services, occasionally they were attacked, killed, and expelled to neighboring countries. And then a massive shift in Christian belief changed the social and political landscape in Europe once again.

In 1517, a German monk named Martin Luther disseminated a critique of the Roman Catholic Church called the 95 Theses. Within 40 years, half of Europe had broken from the Catholic Church and formed new sects of Christianity in what was known as the Protestant Reformation. Luther initially appealed to the Jews, because he thought his ideas would convince them to convert to his new form of Christianity. When they failed to convert, he, like others before him, used the power of old myths against them.

20 years later, in a text, On the Jews and their Lies, we find Luther articulating every single canard that had been developed in the course of the medieval period in the most hideous language, in which he calls for things like burning down synagogues and ultimately forcing Jews to toil on the land like all other good Christians, not as the usurers that he deemed them to be.

As new Christian ideologies began to take root, wars broke out across Europe. Once again, Jews were forced to adapt to changing circumstances, and their beliefs and loyalties were again called into question. Old stereotypes would be adapted to meet the anxieties of the new day.

How to Cite This Video

Facing History and Ourselves, “The Ancient Roots of Anti-Judaism,” video, last updated May 27, 2022.

Responding to the Synagogue Attack in Colleyville, Texas: For Jewish Educational Settings

This Teaching Idea is designed to help guide an initial class discussion on the hostage situation at Congregation Beth Israel of Colleyville, Texas.
Mini-Lesson
Add to Collection

Responding to the Synagogue Attack in Colleyville, Texas

This Teaching Idea is designed to help guide an initial class discussion on the hostage situation at Congregation Beth Israel of Colleyville, Texas.
Mini-Lesson
Add to Collection

Use this Teaching Idea to introduce students to contemporary examples of Holocaust trivialization and prompt reflection on the question “What are the implications of comparing current events to the Holocaust?”
Collection
Add to Collection

This collection of resources is designed to help educators integrate the study of traditional and contemporary antisemitism into their efforts at combating prejudices and stereotypes in the classroom.
Collection
Add to Collection

Help students strengthen their civic voices by exploring examples of individuals who are choosing to participate and make their voices heard in their communities.
More Like This Teaching Resources Learning & Events
Most teachers are willing to tackle the difficult topics, but we need the tools.
— Gabriela Calderon-Espinal, Bay Shore, NY